Supreme Soul Lord Shiva resides in his Heavenly abode in the seventh sky on the top of the world as below.

Apparently, the poet Jane Taylor in 1806, in her one of the most famous nursery rhymes  “Twinkle Twinkle Little Star” was referring to the Supreme Soul God as:

“Twinkle, twinkle, little star
How I wonder what you are
Up above the world so high
Like a diamond in the sky“

The poet did know in her sub-conscious mind and could elaborate Him beautifully in her poem. 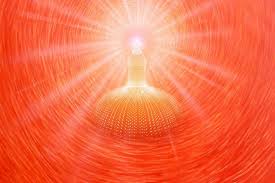 The golden-red bright light spot on the top is the Supreme Light, the Supreme Soul God, Lord Shiva.

He can’t be seen by naked eyes or any instrument but his presence, vibrations and powers may be felt in Spiritual Meditation, which you can learn from us.